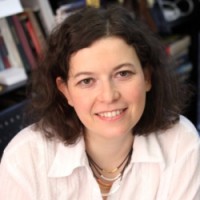 Eszter Hargittai is Associate Professor of Communication Studies and Faculty Associate of the Institute for Policy Research at Northwestern University where she heads the Web Use Project. She is also Fellow at Harvard’s Berkman Center for Internet & Society where she spent the 2008-09 academic year in residence. In 2006-07, she was a Fellow at Stanford’s Center for Advanced Study in the Behavioral Sciences. She received her Ph.D. in Sociology from Princeton University where she was a Wilson Scholar.

Hargittai is editor of Research Confidential: Solutions to Problems Most Social Scientists Pretend They Never Have” (University of Michigan Press 2009), which presents a rare behind-the-scenes look at doing empirical social science research.

She writes an academic career advice column at Inside Higher Ed called Ph.Do.

For more background information, see this feature article in the Princeton Alumni Wekkly.