Crafting the Metagame: Connected Learning in the Starcraft II Community 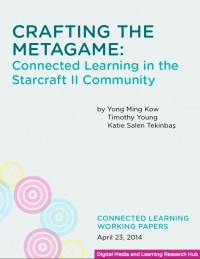 StarCraft, a real-time strategy game developed by Blizzard Entertainment, has been labeled by many of its participants as the chess of the twenty-first century. Combining strategic problem-solving with fast reflexes has turned players into experts. The sheer pursuit of expertise drives many players to stick with the game for years and to share what they know with others.

By examining the StarCraft II community from both player and developer perspectives, we were able to deepen our understanding of the connected learning principles. The StarCraft II environment gives participants an opportunity to engage in either competition or mod-based production that is peer-supported and interest powered. StarCraft II offers participants a chance to develop soft skills that seem highly relevant to future work environments, characterized by constant competition and nonstop learning. In such environments, actors who are interest-driven and peer supported are likely to perform better. But, in order to galvanize peer support, learners have to learn to participate deeply and congenially, exercising skills, such as openness toward criticism, initiative, and civic mindedness. With participation in the community so closely linked to learning, encouraging youth to actively engage. For educators in the twenty-first century, online communities such as those that have been established around games such as StarCraft offer exciting models of peer-based learning environments. Players can move at their own pace, take advantage of a diverse set of resources created by other players, and are invited to contribute their own knowledge and expertise. How cool is that?