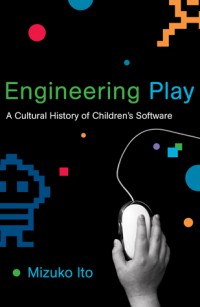 Today, computers are part of kids’ everyday lives, used both for play and for learning. We envy children’s natural affinity for computers, the ease with which they click in and out of digital worlds. Thirty years ago, however, the computer belonged almost exclusively to business, the military, and academia. In Engineering Play, Mizuko Ito describes the transformation of the computer from a tool associated with adults and work to one linked to children, learning, and play. Ito gives an account of a pivotal period in the 1980s and 1990s, which saw the rise of a new category of consumer software designed specifically for elementary school–aged children. “Edutainment” software sought to blend various educational philosophies with interactive gaming and entertainment, and included such titles as Number Munchers, Oregon Trail, KidPix, and Where in the World Is Carmen Sandiego?.

The children’s software boom (and the bust that followed), says Ito, can be seen as a microcosm of the negotiations surrounding new technology, children, and education. The story she tells is both a testimonial to the transformative power of innovation and a cautionary tale about its limitations.

Mizuko Ito is a cultural anthropologist who studies new media use, particularly among young people, in Japan and the United States, and a Professor in Residence at the University of California Humanities Research Institute.