The Cost of Engagement: Politics and Participatory Practices in the U.S. Liberty Movement 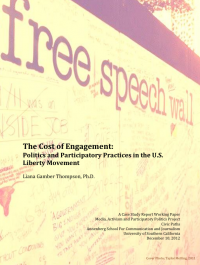 In the past decade, young libertarians in the U.S., or members of the Liberty Movement as it is called, have utilized new media and technology along with more traditional modes of organizing to grow their movement, capitalizing on the participatory nature of the internet in particularly savvy and creative ways. Still, the Liberty Movement is quite unlike more progressive, grassroots movements, with its organizations and participants sometimes relying on established institutions for various forms of support. As this report highlights, the Liberty Movement represents a hybrid model, one that embraces participatory practices and interfaces with formal political organizations and other elite institutions. This case study outlines the:

In a letter to Richard Rush dated October 20, 1820, Thomas Jefferson wrote, “The boisterous sea of liberty is never without a wave.” This report suggests that participants in the Liberty Movement would concur with respect to the challenges they encounter; largely ignored by mainstream media and pushed to the margins of the electoral process, libertarians have it tougher than many groups when it comes to the task of gaining voice and visibility in the mainstream political debate. This report examines how young libertarians confront such obstacles and presents readers with a detailed account of young libertarians and their relationship to the contemporary political landscape.