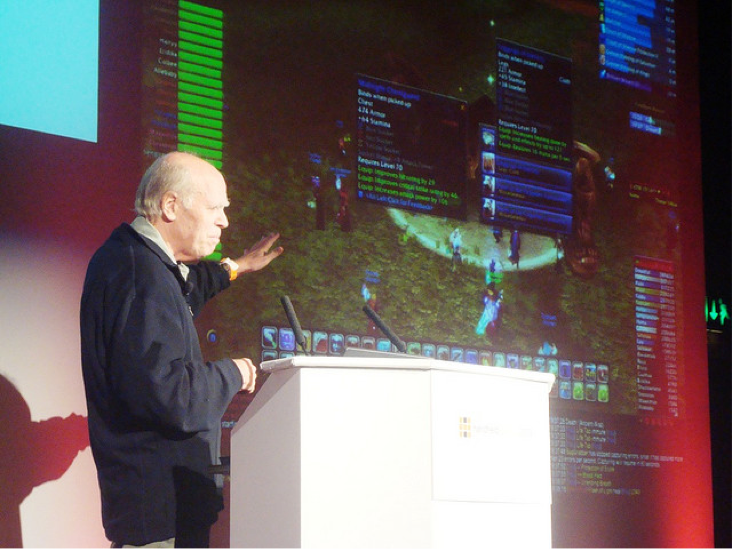 As the Mary Lou Fulton Presidential Professor of Literacy Studies at Arizona State University, James Paul Gee is one of the most respected academics in the field of education. Perhaps the most widely recognized scholar on games and learning, Gee’s book, What Video Games Have to Teach Us About Learning and Literacy, was the first of its kind to argue that good video games are designed to enhance learning through active learning principles supported by research in the Learning Sciences. Gee, who has written extensively on linguistics, psychology, and education, has recently shifted his attention to learning systems that recruit multiple types of digital media. His latest book, The Anti-Education Era: Creating Smarter Students Through Digital Learning explores “what it means to be smart and to be a fully awake participant in our high-risk global world in the twenty-first century.” Gee is also an advisor to the Working Examples community and Arizona State University’s Center for Games & Impact. We spent a few moments with Gee discussing the potential games and alternative research practices have in transforming today’s education model.

In the next decade, do you see video games being embraced in classrooms as practical learning tools, and how will the increased popularity of mobile technology among youth support this cause?

You can’t begin to answer questions around mobile and games until you have specified the learning system. This is the trouble with today because we talk about how we should use technology and how technology is going to reform schools or solve significant problems when we haven’t answered fundamental questions such as: How do we want people to learn? What do we want them to learn, and what should the outcomes be?

I was part of a movement decades ago called the new literacy studies, which was based on a counter intuitive claim that if you want to understand literacy, you shouldn’t start with literacy because literacy is always embedded in social practices. Different communities use literacy in different ways at different times. If you want to understand literacy, start with the social practices and then ask, how do they recruit written language? The same thing is true of digital media. All of these tools have things they are good at and not good at. Many video games are very good at creating motivation and creating engagement, but they are not good for covering a whole curriculum. If you want to understand augmented reality, mobile games, or technology, don’t start with the technology — start with the learning system. Then, once you have answered these fundamental questions, you can determine how and for what purposes you are going to use a specific tool within this learning system.

What do you see as the one thing that will most likely revolutionize education?

The thing that will revolutionize education, but not necessarily for good, is the iPad-like device. The reason for that is not that the devices are essentially extremely good, but it is because the states are mandating that they get their tests digitally on a tablet because it’s cheaper. But once you mandate that the curriculum come on an iPad-like device, it’s no longer text — it’s media. It is going to have images, video, and games. It’s multimedia. So all of a sudden, inadvertently and accidentally, you have demanded that we move from textbooks to multimedia. This opens up a wonderful opportunity for good in that we can customize and crowd source all kinds of simulations, games, graphs, and videos, and we can open source material, therefore getting rid of big publishers and fixed textbooks. It also has the potential for huge bad because it is possible that as we open up all of these niches for multimedia curriculum that can be based on problem solving and situated learning, big publishers will just monopolize that, and we will go back to more exciting skill and drill.

People will always think it’s mobile phones that are going to revolutionize everything, but I actually think as we see phones and other things all converge on pads, we will see that people will do digital curriculum through pads and not textbooks. That’s where we’ll actually be, and those who care about the future should push for two things: one is that this doesn’t monopolize in the hands of a few big publishers like text did; two is that we don’t just fixate on the technology all by itself, but really keep the focus on the learning and interaction among kids, which is facilitated by these different technologies.

What is your hope for Working Examples in terms of building an alternative to the current educational research model?

The basic principle behind Working Examples is very close to my heart. For eight years, I ran team meetings of top national scholars on assessment trying to get these diverse voices to move the field into a broader conception of learning and assessment. These were all very wonderful, smart people, but what I learned is that academics like to give their theory and copious examples of what they don’t like, but what they don’t do is give concrete examples of what they like that fits their theory. That’s fine if your entire job is to explain your theory to people who have already accepted it, but when you are talking to people who have different theories, each partner cannot understand the other theory unless he/she can get an example of how it applies in a place where it fits the theory. We are great at critiquing. For example, experts would talk about how little they liked No Child Left Behind, then they gave their theory, but when I asked for an example, they couldn’t give me one. How are we ever going to bring people together across disciplines, and how are academics going to have any impact if all they can do is talk theory and negativity?

I wanted to have a place where people could argue first through examples — here is my theory, and I will show you an example of it so you can not only understand it in concrete terms, but you can put up your example and you can either agree with me and provide an additional example, or you can disagree with me and provide a separate example. We can talk about it at a concrete level across disciplinary boundaries and invite non-academic into this discussion such as teachers and policy makers. In the end, we will come out not only with a better theory, but also with a practical, operational possibility of doing something. This is unique, and it could be transformative of academics.

One major problem in education game development is combining research and design with sustainable business models that can reach all youth, not just privileged youth. How are you and your colleagues addressing this issue?

Equity, at the education level, is not about people being in affinity spaces, but it is about people having what I call “value-added versions.” If you play a game, it may not necessarily be good for your future, but if you are modding the game and you are joining a complex critical discussion, then you can connect your interest to the world and to other skills

So the question of equity is, how do we give people these rich set of experiences at the highest value-added level where they become producers and not just consumers? Rich families already do this for their children very well, so how do we do it for all children? We can’t ignore their families, and we can’t ignore their early upbringings.

We are looking for the models by which we can sustain innovation that helps poor youth and doesn’t just make the rich richer. iCivics is doing this right now, and quite frankly we don’t know a lot of other models because we are learning this late, and we are learning it in an environment where the digital media sector is changing very rapidly. Start-ups go in and out as the technology and the models change. I can’t tell you how many start-ups have started with this intention, and then they find out that they have to change their product to be skill and drill so they can sell it to a school, or they make it spiffy and sell it only to rich kids. It is a problem, and we don’t know the answer.

The Center For Games & Impact, mainly through Alan Gershenfeld and his team, tries to pioneer some sustainable gaming models, but this is a cutting-edge issue. iCivics is in all 50 states so it is certainly sustainable, but this is a genuine question for the future that needs to be funded and needs to be on the front burner.

Gamestar Mechanic, which was the first game project that MacArthur funded, is sustaining itself, but it is important to realize it takes a lot longer than you would think for a game to become sustainable. You can’t write off projects just because they didn’t become sustainable in just two or three years. My bet is that we are going to come up with newer models, and I hope we do, but people have to be willing to join in on the conversation.

You seem to have a genuine excitement for the topics you study. Where does it stem from?

Different academics have different personalities in terms of how they work. When I get into a new area, I get very excited, and I feel that I can write in a very compelling way about it because I don’t know enough about it to make it boring. I enjoy writing when I don’t know what I am talking about, and when I do know what I am talking about, I change areas. That’s not how everybody works.

Because of the weirdness of my schooling, I had never read any poetry until I got my first job in academics. I was a linguist, and I was at a college that needed to attract more students to linguistics. There were a lot of students in the humanities, so someone had the idea that we should teach a course in linguistics and literature. Even though I had never read any poetry, it was decided I would teach the class. I asked a friend, “Where do I start?” He directed me to a Norton’s Anthology of Poetry, and I sat down, read it, and was completely blown away by how great the material was. I am so glad that I found it by accident without somebody taking out the joy and the wonder of it. I don’t know if that would have happened with games, but I think it’s often a good thing for adults to come to something later in life that people already know because it not only challenges them as a learner, but it also allows them to see it as a child sees it and not as a student sees it.

Now ironically, at the age of 65, I have begun writing poetry. Soon I will have my first book of poems out. I would never have predicted that. But that’s just how our lives work. I do see connections between the things I have done, and I don’t think it is random, but when something floats up that just looks delicious to pursue, I will take the risk to pursue it, and every time I have taken the risk to pursue something in the moment, it has worked out really well for me.