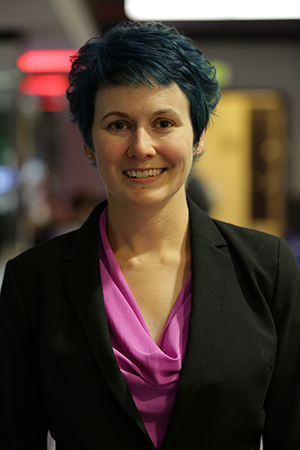 Crystle Martin, a postdoctoral researcher for the Digital Media and Learning Hub’s Connected Learning Research Network of the University of California Humanities Research Institute based at UC Irvine, has been awarded a $24,000 grant to implement STEM (science, technology, engineering and mathematics) workshops at libraries throughout Southern California.

The Institute of Museum and Library Services’ “Sparks! Ignition Grants for Libraries” award will allow Martin to help libraries offer young patrons after-school workshops that teach them how to code using Scratch, a programming language.

Such a program, “Coding with Scratch,” was offered last summer by the Connected Learning Alliance at a couple of Los Angeles libraries. Scratch was developed by the Lifelong Kindergarten Group at MIT Media Lab as an easy way to learn to code. It is offered online and millions of kids worldwide have learned coding through its website.

Besides programming, Scratch teaches students mathematical and computational ideas while they create programs for their own interactive stories, games, animations and simulations.

Martin’s project, titled “Interest-Driven Learning and Scratch,” grows out of the research from “Connected Learning: An Agenda for Research and Design” and an ongoing research project called “Coding for All: Interest ­Driven Trajectories to Computational Fluency,” which focuses on exploring youth, connected learning and coding to create more equitable learning opportunities and to support youth as they bridge their interests to academic and future pathways.

As part of the Digital Media and Learning Research Hub, Martin, of Long Beach, has worked with a team of researchers, educators and librarians nationwide, studying interest-driven learning and designing programs that foster equity. And, when the workshops are launched, they will be offered in libraries, located in low-income neighborhoods.

“Connected learning advocates for learning which is socially-embedded, interest-driven, and oriented toward educational, economic or political opportunity,” she said. Her project will implement workshops intended to expose youth to coding through other interests, such as dance, music or video games.

“The point is not to make the youth into expert coders, but instead to introduce youth who may otherwise be reticent about or uninterested in getting involved in a STEM practice like coding through other topics that draw them to the workshops because of their interests,” Martin said.