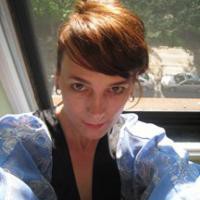 Katie Salen is Professor of Games and Digital Media at DePaul University, and former Director of the Center for Transformative Media, a research center focused on emerging trends in design and media at Parsons the New School for Design. She locates her work in the field of game design and serves as the Executive Director of a non-profit called the Institute of Play that is focused on games and learning. Katie led the team that founded Quest to Learn in 2009, a 6-12th grade public school in New York City, as well as CICS ChicagoQuest, a 6-12 charter school that opened fall 2011 in Chicago. Katie is co-author of Rules of Play, a textbook on game design, The Game Design Reader, Quest to Learn: Growing a School for Digital Kids, and editor of The Ecology of Games: Connecting Youth, Games, and Learning, all from MIT Press. She has worked as a game designer for over 12 years and is a former co-editor of The International Journal of Learning and Media. She was an early advocate of the then-hidden world of machinima and continues to be interested in connections between game design, learning, and transformative modes of play. http://www.newschool.edu/parsons/faculty.aspx?id=48715