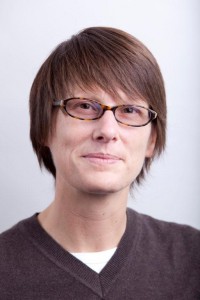 Mary L. Gray is an Associate Professor in the Department of Communication and Culture at Indiana University, Bloomington. Her first book concentrated on contemporary gay, lesbian, bisexual, and trans-identifying (LGBT) youth experiences in the United States (see In Your Face: Stories From the Lives of Queer Youth, Haworth Press, 1999). That led her to wonder: what’s life like for youth who don’t have easy access to queer communities and resources typically associated with cities through out the United States? Where, when, and how do youth in the rural United States acquire the language for their queer senses of self? And with the rapid but unequal incorporation of digital media into the lives of youth and their support agencies, what difference does the Internet’s increasing presence—and presumed ubiquity—make to these youth negotiating their sense of sexuality and gender ?

She spent 2001-2007 looking at how young people, living along Kentucky’s Appalachian borders, use media to negotiate identity and visibility in this rural region of United States. Specifically, she studied how rural LGBT youth and their advocates use local support agencies, peer networks, and the internet as sites and technologies of sexual and gender representation–what she refers to as queer identity work. Her book, Out in the Country: Youth, Media, and Queer Visibility in Rural America (New York University Press, 2009) shares what she learned from rural queer youth and their adult allies and offers their lessons for political organizers and media activists everywhere.

View a synopsis of Out in the Country here

These days, she has two, larger ethnographic projects competing for my attention: one explores how mobile media and constrained access to it shape people’s everyday lives. What do people do with mobile technologies, designed for people on the move, if they feel stuck in or tethered to the places and social locations they call home? She has a second passion/obsession: a study that traces how ethics and the cyberinfrastructures of research compliance produce norms of vulnerability and risk in social scientific research involving human subjects.