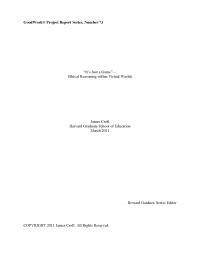 Abstract: “How do Boston-area youth (15–25) reason about ethical dilemmas occurring within virtual worlds such as ‘World of Warcraft’?”; and “Which considerations seem to shape their ethical responses?” In semi-structured interviews 27 young people were presented with an ethical dilemma: subjects were asked to imagine that they had been playing an online multiplayer game of around 30,000 players for two weeks. Within the imagined game, they are asked whether or not they would join their online friends in selling “Pseudogems”—worthless items that are thought to be valuable by new players—to others in the gameworld. The responses of our participants suggest that most young people (13 of 27) would sell the gems, while 8 would not, with 6 giving a mixed response. The interviews reveal that, of the participants who would sell the gems, the driving reason is the fact that neither the gems nor the currency is “real”, and that the transactions are “only a game”. Analysis of this perspective, and competing viewpoints from other participants, provides a new set of considerations for those wishing to encourage ethical behavior among youth online.