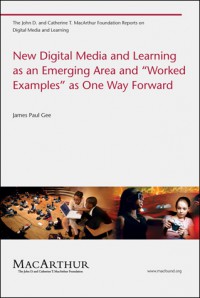 In this report, noted scholar James Paul Gee discusses the evolution of digital media and learning (DMAL) from its infancy as an “academic area” into a more organized field or coherent discipline. Distinguishing among academic areas, fields, disciplinary specializations, and thematic disciplines, Gee describes other academic areas that have fallen into these categories or developed into established disciplines. He argues that DMAL will not evolve until a real coherence develops through collaboration and the accumulation of shared knowledge. Gee offers a concrete proposal of one way scholars in DMAL could move the area forward to a more cohesive, integrated, and collaborative enterprise: the production of what he terms “worked examples.”

In Gee’s sense of a worked example, scholars attempting to build the new area of DMAL would publicly display their methods of valuing and thinking about a specific problem, proposing them as examples of “good work” in order to engender debate about what such work in DMAL might come to look like and what shape the area itself might take. The goal would not be for the proposed approach to become the accepted one but for it to become fodder for new work and collaboration. Gee concludes by offering a sample worked example that illustrates his proposal.

James Paul Gee is Mary Lou Fulton Presidential Professor of Literacy Studies at Arizona State University. He is the author of Social Linguistics and Literacies, a foundational work in the field of New Literacy Studies, and Why Video Games Are Good For Your Soul.