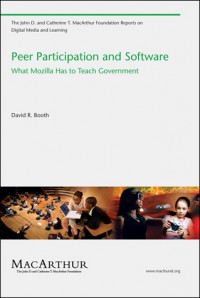 Firefox, a free Web browser developed by the Mozilla Foundation, is used by an estimated 270 million people worldwide. To maintain and improve the Firefox browser, Mozilla depends not only on its team of professional programmers and managers but also on a network of volunteer technologists and enthusiasts—free/libre and open source software (FLOSS) developers—who contribute their expertise. This kind of peer production is unique, not only for its vast scale but also for its combination of structured, hierarchical management and open, collaborative volunteer participation. In this MacArthur Foundation Report, David Booth examines the Mozilla Foundation’s success at organizing large-scale participation in the development of its software and considers whether Mozilla’s approach can be transferred to government and civil society.

Booth finds parallels between Mozilla’s collaboration with Firefox users and the Obama administration’s philosophy of participatory governance (which itself amplifies the much older Jeffersonian ideal of democratic participation). Mozilla’s success at engendering part-time, volunteer participation that produces real marketplace innovation suggests strategies for organizing civic participation in communities and government. Mozilla’s model could not only show us how to encourage the technical community to participate in civic life but also teach us something about how to create successful political democracy.

David R. Booth is Creative Writing Professor in the MFA in Writing Program at the University of San Francisco. His work has appeared in Washington Square, The Missouri Review, Opium, and other periodicals.